Creature Fear killed it at St Kilda Festival earlier this year, so we're keeping a keen eye on them! Embracing creativity in iso, this talented team produced their latest music clip, Little Fishes, in their living room.

We chatted to them recently about their process, Larni's rabbits, their fave new artists and more. Read on, then watch the awesome clip at the bottom of this page.

If you've discovered a great new artist or group this year, send us a message on Facebook and let us know! 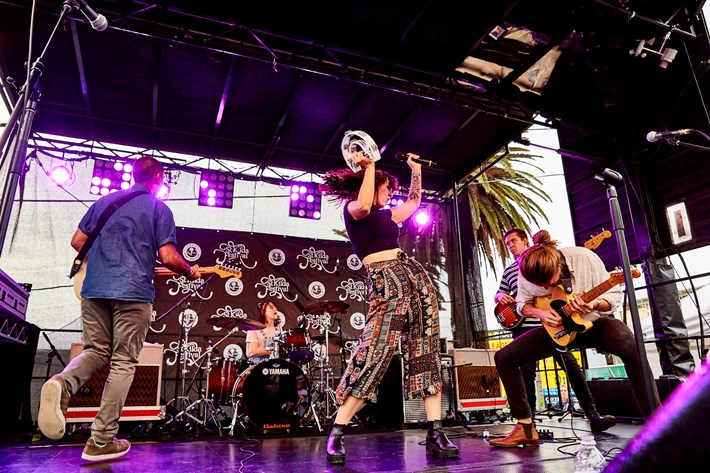 You guys love your creative film clips! The clip for ‘Please Me’ is such a hit in the St Kilda Fest office. Apart from obviously not being able to come together for this next one, what made you choose stop motion for Little Fishes? Did you consider other film techniques?

Cam: So glad you love the Please Me clip and glad you’re digging this one too! We’ve had a lot of fun making all our videos. We originally had a live action video planned and were in the final stages of storyboarding when the second lockdowns were announced. With the possibility of all getting together impossible and a release date for the song locked in it became clear doing an animation was the only option.

We’ve always wanted to do an animation but never thought we’d be crazy enough to do it ourselves, considering it far too much work and hard to execute well, whilst too expensive to get anyone else to do it.

But this time, with the high anxiety of everything going on and literally nothing else to do we welcomed a project to take our mind off everything, so Amy (band mama, designer and all round hero) and I decided together we’d take the plunge and started talking about how we could tackle it.

Did you know it would take as long as it did to create?

Amy: We knew it was going to be a monster of a job so we were quick to build a little work station on the floor (not the greatest decision for our postures). We used a note pad, crates from the garden, a wood post, ring light, sticky tape, and a phone to take all the pictures with. This was all held together by some load bearing books and shoes.

We developed the video scene by scene, worked out the basic beats and got designing. Cam designed the people while I drew the backgrounds and animals. We found that the actual drawing/designing process was as long as the actual animation process.

Each drawing on the page had a role to play and we designated individual pieces to each other to keep track of and move around in order to keep every little detail cohesive. It’s little details or story lines we found in the spur of the moment/mid scene that added more time but I think that’s why we enjoyed making it so much.

It was a very steep learning curve but by the end we were a well oiled machine. Once things were edited and lined up with the song, we finished things off with some DIY sound effects (seagulls, fish and wind). We roughly recorded our voices into the phone which seemed to help bring things together nicely and was another little thing that we came across in the spur of the moment.

The whole process took 50+ hours which we smashed out in a week, with 2500+ individual photos.

Cam: I think we did! But we also really enjoyed every moment. Amy and I hadn’t had any experience with animation or had done anything like it before. I think you can tell when watching it that scene to scene it gets a bit better as we learn from the mistakes of the previous one.


Is there any truth in the little snippets of Jack cooking, Larni with her giant rabbits etc.?

Cam: Yes there certainly is! Although we never actually get to eat any of it ourselves, Jack is often talking about what he’s been cooking before band practice or what he has whipped for his family or housemates. He even describes the recipes and I nod along pretending to keep up. So we decided to give him his own cooking show, but because we are true friends, we decided to make him so hopeless that he sets himself on fire.

Larni has two rabbits named Chandler and Pez that live with her in her room. So naturally they needed to reverse the hierarchy and show her whose boss by devouring her. Jason also worked as a piano mover and Jacqui as a singing teacher so we decided to portray how we pictured them on the job.

Have you got the filmmaking bug now? Will we see you at St Kilda Film Fest any time soon?

Cam: I love brainstorming and developing concepts, most of our videos are comedic in nature so they are always a bit absurd so everything and anything is always on the table. Also acting is so much fun getting to get loose and show off some inner insanity.

Amy: I absolutely adore the creative process of film making. I think there is something really special about being able to bring ideas to life. Bringing visuals to music is something really exciting and special, there are so many options and pathways you can take it. The band and I work together a lot, their energy and vibe is always inspiring and I love how willing they are to give anything a go. I have made a handful of films/music videos over the last few years for Creature Fear and my personal projects and it’s something I definitely want to continue exploring.

Do you manage to stay motivated while working separately? Is this at odds to how you’d usually work?

Jacqui: Motivation comes in waves. I’m definitely training myself to stop feeling guilty for not feeling creative 100% of the time. I’ve still been writing but also taking it easy and reflecting a lot during this time.

Cameron: It’s definitely harder not being able to see each other nor having the magic moments that can occur in band practice when songs take shape. Though the idea of a time when we are finally able to get back together on stage to perform with a whole bunch of new tracks is very exciting, so that’s great motivation to keep picking up the guitar.

Jacqui: You can fail at what you don’t want so you may as well take a chance doing what you love - Jim Carrey.

Larni: Best Advice was to go do a music degree. Also if you mess up, just keep playing and to have fun.

Have you been listening to any new artists lately? Who should we keep an eye on?

Jacqui: I’ve been loving Shannen James at the moment. I’ve definitely belter out her song Arrows’ in my car 100 times

Jason: My two favourite local artists at the moment are Creek and Dandecat. Keep an eye on both of them, they will do more great things I have no doubt.

Larni: I’ve been fan girling Dr. Sures Unusual Practice. I'm a sucker for anything that uses weird chords and sounds and brings something fresh. They are loud and fiercely political too - true punks. Keep an eye on them cos they are already smashing it in the scene! I'm also secretly into the pretty, romantic stuff too so I've also been loving Wilson's Prom's new single and Elizabeth. I haven't been digging into new stuff as much lately but I also rate Eileen Grace, Baarka, Disco Junk and Shrimpwitch still remains my no. 1 Melb band. Georgi's squawking vocals are my fave.

Check out the new clip for Little Fishes below, and be sure to keep an eye on Creature Fear. Check them out on Facebook here.